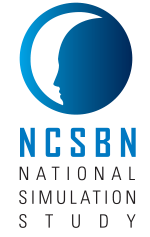 NCSBN conducted a landmark, national, multi-site, longitudinal study of simulation use in prelicensure nursing programs throughout the country. Collaborating with learning institutions across the U.S., NCSBN embarked on a research initiative exploring the role and outcomes of simulation in pre-licensure clinical nursing education.

The NCSBN National Simulation Study was conducted in three phases. Phase I involved a national survey of simulation use in pre-licensure nursing programs. Phase II was a randomized, controlled study examining the outcomes of various amounts of simulation to replace a portion of the hours spent in traditional clinical settings. Phase III was a longitudinal study that followed the nurse graduates into their clinical practice as new registered nurses.

View the results of this landmark study.

A survey was developed to determine the prevalence of simulation use—types of equipment used and the courses in which simulation is used; faculty training and development to use simulation; and if simulation is used as a substitute for clinical hours. The survey was sent to all pre-licensure nursing programs in the U.S. in January 2010. Responses were received from 1060 programs, representing all 50 states (a 62% response rate). Results of the national survey were initially published in the Journal of Nursing Regulation in October 2010. The results from a qualitative analysis of the written responses and open-ended questions obtained from the survey were published in Clinical Simulation in Nursing's April 2012 issue.

The second phase of the National Simulation Study involved randomizing nursing students to receive varying amounts of simulation in place of traditional clinical hours. Ten nursing programs, across the US, were selected to participate as sites for the National Simulation Study. Five associate degree and five baccalaureate programs were selected based on an application process and the ability to meet study eligibility criteria. In August 2011, new nursing students in those programs were randomized to one of three study groups: clinical as usual (control), 25% simulation or 50% simulation. Students remained in their assigned study group for all of the core clinical courses in their nursing program. Each semester and in each of the core clinical courses, students were assessed on their nursing knowledge, clinical competency and how well they perceived their learning needs were met in both the clinical and simulation environments. Students in the study cohort graduated in May of 2013, with NCLEX pass rates data collected continuing through December 2013.

This study was designed and powered to test the null hypothesis—there are no differences between the three study groups in clinical competency, nursing knowledge or learning needs being met.

The study cohort of nursing students graduated, and were followed in a longitudinal study of their clinical practice as newly graduated registered nurses. The new nurse graduates were followed for up to 6 months of practice. This final phase of the study examined how well the new graduate nurses were prepared for practice. This phase of data collection began when the study cohort graduated in May 2013 and continued through June 2014.

The study cohort was also followed for the first 6 months of clinical practice. There were no differences in manager ratings of overall clinical competency and readiness for practice at any of the follow-up survey time points: 6 weeks (p = 0.706), 3 months (p = 0.511), and 6 months (p = 0.527) of practice as a new registered nurse.

The study provides substantial evidence that up to 50% simulation can be effectively substituted for traditional clinical experience in all prelicensure core nursing courses under conditions comparable to those described in the study.

In 2015 an expert panel convened by NCSBN evaluated the data gathered through this study, examined previous research and the International Nursing Association for Clinical Simulation and Learning Standards of Best Practice: SimulationSM, and used their collective knowledge to develop national simulation guidelines for prelicensure nursing programs. Those guidelines, evidence to support the use of simulation, and information for faculty and program directors on preparation and planning for using simulation successfully in their nursing programs were published in the Journal of Nursing Regulation in October 2015.