Pennsylvania  Sen. Lisa Boscola first heard about the Nurse Licensure Compact (NLC) and other compacts at a 2017 legislative symposium hosted by the National Conference of State Legislatures. “I just remember this ‘wow’ moment, like, these just make so much sense,” she says. “I remember calling my staffer as soon as the presentation was done and said, ‘get bills introduced ASAP.’” 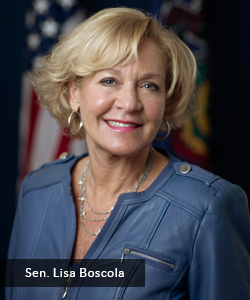 Representing Pennsylvania’s 18th Senate district, Boscola has been a proponent of the NLC and the greater mobility, public protection and access to care it provides. She serves on the Senate’s Consumer Protection and Professional Licensure Committee and was the primary sponsor of the original Senate bill that passed in May.

Her work has paid off. Pennsylvania will become the 37th jurisdiction to enact the NLC, joining a number of nearby states including Delaware, Maryland, New Jersey, Virginia and Ohio.

“By not being a part of the nurse compact, Pennsylvania has frankly been at a disadvantage,” says Boscola. “We are a state with over 12.5 million people – and the proportion of our population over the age of 60 is one of the highest in the country.  That number is only going to climb as the baby boomer generation continues to age and need more advanced medical care. Joining the compact is going to benefit Pennsylvania nurses, hospitals and health systems, physicians, nursing homes, home health care services and -- above all – patients.”

Pennsylvania boasts more than 75 baccalaureate and associate degree nursing programs. Boscola is proud of the high number of graduates, and she wants to keep them. Graduates preparing to take the NCLEX® Exam and deciding where to live and practice have until now faced a decision -- whether to live in Pennsylvania, where they would be licensed to practice in one state, or live in nearby states where they can practice with the benefit of a multistate license. “With us having such a high number of nursing programs and high enrollments, this also puts Pennsylvania into an advantage to remain a competitive state for retaining more of these new graduate nurses,” she says.

While there was opposition to the legislation, “there was a lot of support from the state nurses association, hospitals and health systems, nursing homes and home health services,” Boscola explains.

The  Pennsylvania State Nurses Association (PSNA), which represents the interests of more than 200,000 registered nurses (RNs), was previously opposed to the NLC due to issues like lost licensure revenue, uncertainty over licensure requirements and public safety concerns. PSNA reversed its position in 2020, due in part to 2015 enhancements made to the NLC, including mandatory background checks, fingerprinting and uniformity of licensure requirements. Most importantly, the PSNA listened to nurses.

“At the end of the day, this decision came directly from our nurses,” says Noah Logan, government relations specialist at PSNA. “Our members were very passionate about this issue, and this is something that they absolutely wanted to get done. Many of the neighboring states are in the compact, and having those licenses is really a burden, it is a stress and it is redundant.”

PSNA regularly surveys nurses about the issues most important to them. The compact was one of the top concerns. “Our members are excited about this. I cannot get on the phone with our members without them asking me how long it is going to be until they get a multistate license – that is genuine, everyone has asked me about it.” 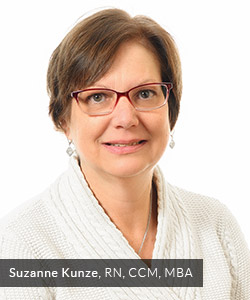 Nurses like Suzanne Kunze, RN, CCM, MBA, are indeed enthusiastic about Pennsylvania’s entry into the NLC. “I live in the eastern part of Pennsylvania, close to Delaware, close to New Jersey, close to Ohio,” she says. “I know there is a lot of cross-pollination of nurses that go between the different states, and they are required to have two to three licenses to do that.”

Case Management Society of America. “Even in my early days before I got into management, I had to get additional licenses to manage my patients,” she recalls. “It was a necessary part of the job, but it could have easily been eliminated if all of the states recognized each other.”

When Kunze worked in care management, one of her biggest concerns was having the right staff with appropriate licensure. “They were managing cross-state members, so, it would not be uncommon for me to have nurses who managed members in multiple jurisdictions and were required to hold four or five different licenses, just so they could advance their caseload,” she says. “This was a huge expense, and it was very time consuming. It delayed me in having my case managers work with those members until they got the right licensure.”

Kunze, Boscola and Logan all concur that when the COVID-19 pandemic hit, everything changed. “There has been a huge movement to telehealth because of the pandemic,” says Kunze. “There were so many trials to do telemedicine for years, and it was never really successful until the first month of the pandemic. All a sudden, telemedicine was the hottest thing since sliced bread, and people could actually get in to see their providers. It is the same thing for the case managers. There was such a tremendous amount of need.”

In the event of a crisis like COVID-19, nurses from multiple states can quickly and easily respond. The compact reduces complexity, decreases cost and provides an equal or even higher level of protection to the public. Licensure requirements are aligned in NLC states, and all nurses applying for a multistate license are required to meet them.

“I have said it numerous times this year and last year – the pandemic has only shown us more proof as to why we need these compacts in the medical field,” says Boscola. “As the country several times saw geographic swells with positive COVID cases and surges, the nurses and doctors nationally were able to respond to this. If the Northeast was struggling and the Midwest was not, then thousands and thousands of doctors and nurses came to the Northeast to help in the response. And when that changed in the other direction, we were able to send physicians and nurses to the areas of greater impact. In our state, because we were not in the nurse compact, the governor had to issue emergency waivers to permit out-of-state licensed nurses and doctors to come in and help with the surges. Early in 2020 when we were dealing with the first surge here, we had to bring in over 1,600 nurses to help. If we had not had those emergency powers – there is no telling how badly it could have been as far as a medical response to the most critical of patients. So, for me, the pandemic really brought attention to the need of why these compacts are not only beneficial, but crucial.”

“COVID definitely had a huge impact on us,” says Logan. “We needed to be able to move nurses around quickly. All the things that were going through the nurses’ minds in March, April and May last year; those were rough months. Having to deal with the hassle of licensing, especially during that time, was an unneeded stressor.”

Logan says the PSNA also heard from nurse educators whose employers were requiring faculty to hold licensure in the multiple states where their students resided because they had transitioned to online instruction. “That would not have been necessary if we were in the compact,” he says.

While the news of Pennsylvania joining the NLC is cause for celebration, there is still work to do. With the continued adoption of telehealth and the likelihood of future crises and natural disasters, leaders and stakeholders in noncompact states must decide if now is the time to join with the majority of states that have moved to a care delivery model driven by patient needs.

“God forbid we go through another pandemic or there’s another issue,” says Kunze. “It is going to be an ongoing need. There are a lot of nurses out there and there are a lot of things you can do with your nursing license if it is recognized. It is horrible to have a qualified person who, just because of a piece of paper, cannot go and provide that service. It is something we have been trained for, and that is in our DNA -- to go out and help out. If we are held back, it limits our ability to do what we were put on earth to do.”

For more information about the Nurse Licensure Compact, visit