APRN Campaign for Consensus: Moving Toward Uniformity in State Laws

The Campaign for Consensus is the NCSBN initiative to assist states in aligning their APRN regulation with the major elements of The Consensus Model for APRN Regulation. Those major elements [in each of the four roles (CNS, CNP, CRNA, CNM)] are:

This map is an overview of each state's consensus model implementation status.

We are excited that several states have proposed legislation or rules change that, if enacted, will move them closer to compliance on major elements of Consensus. The maps project at NCSBN launched in Oct. 2011 following a team review of practice acts and rules. Selected elements from the Consensus Model for APRN Regulation were targeted for comparison state to state. We welcome your feedback and your input as we move ever closer to Consensus.

Since the publication of the Consensus Model in 2008, each of the organizations representing Licensure, Accreditation, Certification, and Education of APRNs has worked diligently to make the change in their area that are required to align with the Consensus Model with an intended implementation target of 2015.

If all states adopt the regulatory requirements for licensure, accreditation, certification and education for APRNs, as outlined in the Consensus Model, the benefits will be far-reaching for health care professionals, regulators and consumers.

The Benefits of Adopting the APRN Consensus Model Requirements

Clearly understand the role of APRNs, know that there is a competent individual managing your care and that the practice of APRN is regulated consistently for public protection.

For Employers and Other Health Care Workers

Clearly understand the preparation, training and scope of practice of APRNs you are working with.

Have confidence in knowing that you will meet licensure requirements to practice and that your role and scope of practice will not change if you need to relocate.

Have confidence that your education program is accredited and that you are receiving the appropriate education and training for preparation and entry into advanced practice nursing.

For Boards of Nursing

Fulfill your public protection role and have confidence that licensed APRNs entering your state are competent, having met uniform requirements for licensure from other states.

Be accountable to your constituents that an APRN regulatory model is being employed in recognition of public protection.

Use the "I Support APRN Consensus" logo on your websites or social networking posts and link back to: https://www.ncsbn.org/nursing-regulation/practice/aprn.page

To legislators | To supporters 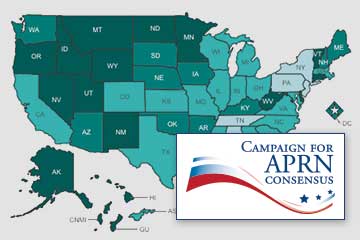